Day in the life of….

Whilst at the Geographical Association’s annual conference last week I was asked why I had chosen teaching.  Firstly, I didn’t come off the school>university>work conveyor belt but took some time doing this and that.  I was attracted to teaching because it gave me the chance to continue to travel and take part in expeditions.  Anyway, sometime over the past eight years I started to take the job seriously and put a bit of time in to it.

Another question that came out of the event last week was that sometime people are left with the impression that everything we do is at the top end of life.  That isn’t the case.  So, I thought I’d share my week so far, even if it’s purely for the reason to look back at upon retirement sometime near the next millennia.

Headed in to work as normal on the train. Takes around an hour door to door.  remember liking my new headphones.  Using Kindle to read.  Get into work, say hello to the team and head over to briefing. Enough said about that.

Registration spent talking about uniform and college taster days and senior pupil nominations.  Period one is a Year 11 RE class.  Talking about my Catholic upbringing and atonement.  Good chance to think about Keira Knightley. Second lesson it’s a PGCE student tutorial followed by an observation of their teaching period 3.  No duty today so both 25 minutes breaks spent drinking filter coffee.

Lesson 4 teach Year 9 using the Bing homepage. Get them to investigate the image developing further their independent enquiry skills needed for the next unit.  Final lesson teaching RE to Year 8 using Banksy’s images in Israel to investigate the current state of affairs.

Look at the fieldwork booklet produced by Sam Atkins.

Introduce the Geography of Sport using this:

And this photo of me taken a few days ago…. 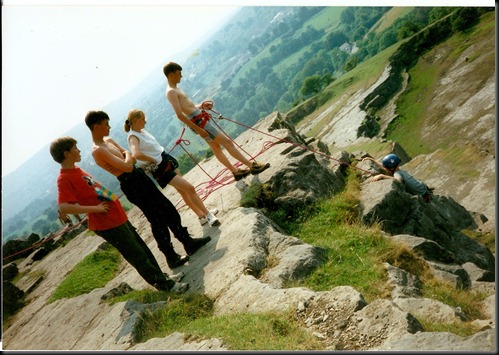 Then made up the new sport of rolling the board pen as close to the fieldwork booklet as possible.  All in order to explore the primary, secondary and tertiary job opportunities and the effect on the environment of sporting activities.  Avoided the Olympics – it’s everywhere and in every subject.  Bored with it.

Lesson two met with someone to speak about getting Augmented Reality into education textbooks etc.  Agreed that BYOD is the way forward.

Lesson two finalised the logistics of upcoming GCSE controlled assessment fieldtrip, spoke to parents about celebrating achievements and interventions of those not performing to par.  Considered writing reports but got distracted talking to Ski company about a ski trip in 2014.

Break duty outside the toilet.  Glamorous and I get paid for it.  Oh, no I don’t.

Lesson four spent with Year 8 watching (parts) of Human Planet Oceans to find out how people use Oceans.  Lesson five spent with Year 7 looking at place stereotypes. May have involved some yellow skinned characters.

After school GCSE workshops and some other stuff I can’t remember.

Curriculum briefing focused on intervention data and fieldtrip information. Welcomed smiling Year 11 back with revision checklists. They stopped smiling.  Year 10 lesson 2 getting ready for their trip to Hengistbury Head on Friday.

Lessons 3 and 4 performed doing some Head of Geography type stuff and reviewing schemes of work and curriculum ready for the move to linear GCSE and reduction in teaching time at KS3 next year.

Lesson 5 supported PGCE trainee with Year 9 by letting her get on with a great lesson.

After school Curriculum Leaders Meeting.  Enough said about that.

Of course, it’s not a blow by blow accurate account.  There was far more coffee drunk and an outside duty talking to a second hand chair dealer.  But I’ll stop there.

Sometimes it’s about getting the normal drudge right.