Closing time
Every new beginning comes from some other beginning's end.

This is the first in a short series of posts around my successful appointment as an Assistant Headteacher at Patcham High School.  The job starts in September.  This post shares a lesson idea that would be worth a polish and revisit for any context.  I’m sharing these things here mainly for me to reflect upon and revisit at a later date, but also as others may benefit from the experience.

The brief was to create a 25 minute lesson around the word ‘INSPIRE’ which forms the school’s mission statement.  The interpretation was open and I wanted to avoid being explicitly geography  linked.  Now, it’s impossible to develop a fully formed lesson in that time with a class that I haven’t met. It’s also not possible to teach an Outstanding lesson to such a group of young people, not least because I hadn’t marked their books.  With this in mind, I wanted to take a risk and show the type of creative stuff I like to do with classes.  The PowerPoints below helped me to create the resources, but I only used two websites during the lesson.

The ‘Do Now’ activity.

My Flickr photostream was displayed and I walked around the room with a bag of props.  The challenge was for the class to figure out the link between the photographs; the objects and myself.  Objects included my running vest, a cycle helmet (I wore this), one of my son’s reading books, my kindle and a piece of Icelandic lava.  I encourage questioning and listening.  As one of my IFTTT recipes is to save all of my Facebook uploads to flickr (mainly because my Apple TV is set up to display my flickr photostream as a screensaver) and are all photos that inspire me, as are the images. This linked into the main activity.

I should add  here that my other intention with this lesson was to see how embedded the school’s mission statement was.  In order for learning to be successful, the Year 7 class would have to know about the motto and its meaning.  My inspiration came from reading a Fireman Sam book to my three year old.  There are two versions of the story: a simple one that summarises the story and can be read by a novice reader and a longer story which is designed for reading together with an adult.  Both sections of text link to the photograph. 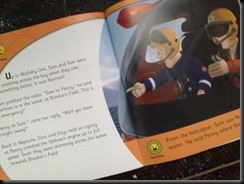 So, I wanted to get a selection of images that the students tried to link to their school’s motto, all within 17 minutes ish.  Easy

The first step was to source some suitable images.  This was done through crowdsourcing by putting a request out on Twitter and facebook.  The slideshare below contains all of the images.  Then, as I wanted the learning to be shared back with those that had shared photographs, I used Fotobabble to demonstrate.  I made it clear to the class (and the observing Deputy) that if we had longer, we would have created our own.  The example was played to the class.

The next mission was to create ‘Curiosity Kits.’ 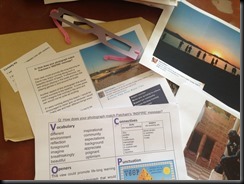 Then it was a case of getting on with it.  A quick think, pair, share supported each pair or trio to select one image and then I worked my way around the room.

These are the supporting resources:

Anyway, there it is!

A HUGE thank you for everyone who contributed photographs. You made it far more random and wonderful!  This is an idea that I will revisit and explore further and will probably find its way embedded within the Priory Geography schemes of work.