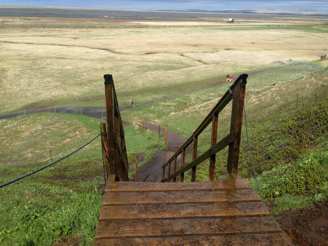 One of the things I'm really going to miss about working at Priory School is working with the fantastic and inspirational team that is Priory Geography.  You may have read recently about Director of Microsoft UK Education Steve Beswick's visit to the department. I am always keen to ensure that any visitor to Priory a geography finds us as we are.  Step in Sam Atkins:

The purpose of this post is to share the lesson I delivered as part of Microsoft Education’s visit to Priory School on 15th May, and the inspiration behind it. For an overview of the visit itself, please read David Rogers’ post here.

On 15th May Priory Geography were delighted to host Microsoft Education. The inspiration behind their visit came from a lively meeting of minds at BETT in January, where David Rogers had been invited to showcase the work we do here at Priory Geography using some of what Microsoft has to offer classroom educators on the chalk face of 21stcentury teaching and learning. For our own CPD, and of course to show moral support to David, Jo Debens and I joined the Microsoft Educationteam at BETT after a day of teaching in school and presenting at the conference itself. What followed were incredibly passionate discussionsabout the current state of education and the real world challenges our young people face today – how well are we actually preparing our pupils for a life of post compulsory education? What better way to answer this question than to bring Microsoft in to Priory, and so the inspiration for their visit was born.

It should be noted that during January 2013 we were (and remain so) aschool very much ‘on a journey’. Ofsted had popped in 12 months previously as part of their routine inspection schedule; however they came armed with a shiny new inspection framework which served to place Priory School in the category of ‘inadequate’. This came with the added bonus of a repeat inspection within 12-18 months, therefore at the time of BETT we were square inside that window. This did not deter us from pressing ahead with plans to host the giants of Microsoft, when perhaps a more sensible approach would have been to wait until afterthe follow up inspection so we could assess the fall out. Priory Geography and ‘sensible’ are seldom mentioned in the same breath. Steve Beswick (Director of Education for Microsoft UK), Mandeep Atwal (Microsoft Partners in Learning) and Natalie Dance were booked in for a May visit, and it transpired that Ofsted came back in February.We are still very much on the same journey, but have made progress from inadequate to ‘notice to improve’, as such there is light at the end of the tunnel. Geography earned an explicit mention in the report for the first time as a model of best practice. We all reflect on the experience positively, it was a shot in the arm Priory School desperately needed.

Anyone who’s played sport competitively will be familiar with the phrase ‘play the game not the occasion’. This was my approach to Microsoft’s visit. Just because Steve Beswick was in the room I wasn’t going to crowbar as many Microsoft applications into the lesson as possible. I also didn’t want the class to feel there was anything particularly out of the ordinary taking place; they’d show me up instantly if this was the case, it had to be just another Wednesday morning for the pupils and for Microsoft too if they were to truly see how we are warts and all. I had Microsoft SkyDrive set up from previous academic adventures, most notably my Geocaching project, and thought this would be a useful platform for the lesson. We use mobile devices in our department frequently, but we are careful to ensure they SUPPORT a learning experience and are not THE learning experience, so nothing new in using iPad’s here. From another whole school project I was involved in, I have the ‘World tour of Priory’ maps(Google Earth satellite image of Priory School with world outline map overlay, I added the grid squares in PowerPoint). Time to give these another whirl. I was introduced to an excellent resource on the recent GA CPD course ‘Leading a successful geography department’. Tagxedoallows users to create distinctive word clouds in a variety of shapes and colour schemes to suit the learning experience. Throw in a global climate zone map, plus six carefully chosen weather and climate country profiles courtesy of the BBC Weather website, and I felt I had alesson to simultaneously challenge and motivate all abilities in equal measure.

The lesson PowerPoint and resources are included here. A summary of the workings of the lesson are below:

We Are Learning & Will Be Able to – pupils to consider throughout lesson and record at end.

Introduce Mystery Country Tagxedo, Climate Map and World Tour of Priory Map, one of each per pair.

Distribute SkyDrive logon instructions, task checklist, iPad’s (one between two) and @priorygeography passports (lanyards which allow pupils to be out of the classroom during lesson time).

The pairs had to carefully study their Tagxedo, with any explicitmention of the country itself removed. With the Tagxedo I was able to be as supportive or abstract as I felt with the shapes and colour schemes, with this Year7 class in mind I loosely matched the colours with those on the climate zone map and utilised shapes that hinted towards a well-known feature of the country. I did this as I wanted progress to be made at least moderately quickly, rather than have them scratching their heads before they’ve even left the starting blocks. Even so, the fact that I had considered this was more obvious to some pupils than others. They had to analyse the text, discuss, and concentrate the resource down into a list of just ten key words. Using these ten words, they then carefully studied the climate map and zoned in on a location which they felt matched the climate they had summarised. Following this the pairs then compared and aligned the climate map with the World Tour of Priory map. They had to travel to their mystery country in school, record the name of the country and a 6 figure grid reference, and finally take a snapshot of themselves with body language and facial expressions representative of the climate they are apparently experiencing. All their work is recordedusing the iPad in OneNote on the SkyDrive, which allowed me to remotely monitor the progress of all the teams as they scattered themselves across the school grounds. Each stage was allocated a number of points for successful completion, to add a friendly competitive element and maintain focus especially when out and about around school. Once back in the classroom (I had used a Triptico timer to set a deadline), the pairs had to input what they felt they had been learning about, and what they felt they were now able to do. This was the crux of the learning experience Microsoft were very interested in.We finished by revealing the identities of the six mystery countries,some were 100% accurate, and a Q&A between Steve and the class.This was an insightful discussion about the pupils own ambitions for life beyond school, and the sort of skills and abilities an organisation such as Microsoft looks for in potential employees.

This lesson is entirely possible without technology such as mobile devices, or a cloud based data collection system. Pencil and paper work just as well for recording their responses.

So in reflection of the root question ‘how well are we actually preparing our pupils for a life of post compulsory education?’, in the case of this learning experience we had pupils delegating, collaborating, problem solving, analysing data, explaining, debating, failing, succeeding, grappling with mobile technology, practising literacy, practising numeracy, dealing with dodgy Wi-Fi, getting frustrated, chasingdeadlines, prioritising, getting lost, finding the right way, asking questions, concluding, reflecting, celebrating and aspiring. Not bad for period 1 on a Wednesday morning.