Sometimes in life, there really are only two options.  Get the wrong one and you can look like a muppet.  Take this useful sign for the toilets in Morocco.  I successfully navigated it, choosing the right option.  The result? No egg on my face.  As a mountain leader, there are many right or wrong decisions that I’ve faced, as there are all over life.  It’s not a good idea to let inexperienced young people walk themselves down Snowdon.  They may die or be seriously injured.  If someone is showing the signs and symptoms of hyperthermia, you need to treat it fast in a specified way.  There is no real arguing with this sign: 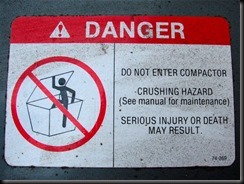 Other options are less obvious.  Take this sign recently spotted near to where I live: 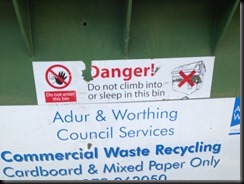 Now, I wouldn’t consider sleeping in a bin.  However, faced with a sub-zero night, I could see the appeal.  The danger? Being tipped into one of those huge lorries with a compactor. (by the way, I only really considered all of this thanks to questions from my four year old boy).
Then there’s teaching arguments.  You know the things, prevalent on Twitter, especially during things like #ukedchat.  It seems that many (on both sides of a divide) can only ever consider that their point of view is right.  I see the experience of others being dismissed (nothing really works, no matter how successful you tell me it was in your school or how many 'academic ‘studies’ have found that it’s a wonder method) and the assumption that one’s experience means that they know what will happen in every single classroom in the known world.  You know the arguments:
And more.  These are arguments that don’t have ‘it’s totally pants, never do it’ or ‘it’s totally the best thing that will transform learning’ that can be generalised to every classroom in one single school, let alone across a nation.  As mentioned by myself many times, the skill of the teacher is to choose the best tools, methods, strategies that will work best in your situation.  I can give you advice, I can say what’s worked for me and what hasn’t, but I can’t tell you what to do.  especially as the same approach often doesn’t work with different classes of young people.  There is no ‘one size fits all’ teaching strategy that will revolutionise your teaching.  If that’s the claim, ask what they are trying to sell you.
My approach?


‘"You want free speech? Let's see you acknowledge a man whose words make your blood boil, who's standing center stage and advocating at the top of his lungs that which you would spend a lifetime opposing at the top of yours.’ The American President.