Yesterday evening saw the second TeachMeet Pompey (Portsmouth to the uninitiated) take place.  The was a fantastic atmosphere and around fifty people attended in the end which was great.

Of course, the highlight for me was watching our on DiGITAL LEADERS give a visionary and professional presentation.  They had put this together independently and without any direction from myself. 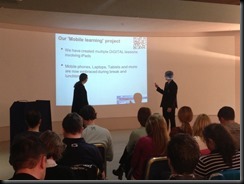 There wasn’t a live stream nor sponsorship as I was aiming to keep teachers talking and learning at the centre of the event and that sort of stuff often detracts from the core purpose.  Of course, the TeachMeet Pompey Laser Quest was again a great success and added a little fun competition to those who wanted to get involved. 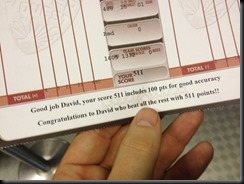 I was also pleased to see Neil Ford talk about the potential of running Hack Days with young people.  Talking of which, the 21st March will see young people led by our own DiGITAL LEADERS and other helpers hack the new National Curriculum.  See this post over at Jo Debens’ blog for more information.

A massive thank you goes to all those who attended.  I estimate that at last half of the audience and quite a third of the speakers were totally new to TeachMeets.  Tell others how good it is!

Thank you also to @GeoDebs for sorting the technical bits and pieces and sorting the TeachEat afterwards.  Finally, thank you to Phil Wright and all those at Action Stations for making it all possible.  A great team and I would recommend getting in touch with the team there for some exciting projects!

Look out for the next edition of TeachMeet Pompey