Developing the quality of GCSE case study answers. *no technology was harmed during this lesson.

Being able to answer case study questions correctly is vital if students are to succeed at GCSE.   This is a description of a simple idea that worked with a Year 10 group studying an LEDC foreign aid case study, in this case Goat Aid.  The OCR B Geography examination demands that three, well developed points are made about a relevant case study that includes place specific detail.  This lesson required:

The lesson began with a Feedback 5 activity that allowed the class to focus on setting their own targets.  As a group, a particular weakness was the lack of specific detail within answers.  Another area that needed development was the way in which students reached plausible conclusions supported with evidence.  It always makes me wonder when teachers say that literacy isn’t important in other subjects as the poor use of connectives was limiting the progress of the class, especially those who are capable of reaching the top grades.

The lesson followed a DME exercise where students had to choose between Goat Aid and Computer Aid.

I quite often physically move across the room to illustrate the progression from a ‘D’ style answer that gives a list basic facts toward the ‘A’ style answer that provides a detailed description supported by evidence.  By modelling this, the aspirations of all students are raised as I’m not a great believer that young people are limited to the ‘target grade'. Indeed, I often feel that the use of these actually limits progress in many cases instead of improving it.  But that’s another post all together!

To take this movement one step further, I put up two statements on opposite sides of the room: 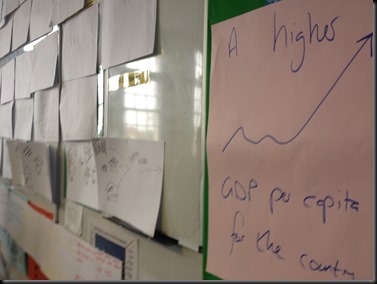 All the students had to do, working in pairs, is get from one side of the room to the other using nine sheets of paper.  The number is significant, with a well developed point representing three sheets of paper: the point; the explanation and the evidence.  Pairs would be chosen at random to explain their links.  The method forced students into using connectives in order to link each sheet of paper.  I didn’t limit the class by specifying whether they could draw. 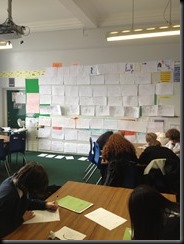 After this stage, I allowed the students to examine each group’s sequence and question them.  We used ‘dotocracy’ for a little bit of AfL.  Each pairing has seven stickers that they distributed as they saw fit. 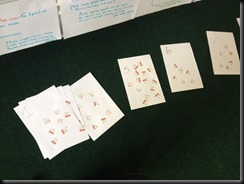 Considering that the class are all around (apart from 3-4 young people) the C/D area, the quality of the work was breath-taking. 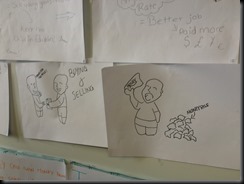 The lesson ended with a 10 minute case study question and I was very pleased to see that the quality of writing, and therefore the marks, were far better than their previous attempts.