The best uses of technology are those that are simple but powerful.  Year 9 are exploring development issues at the moment and this is a brief description of learning activities used this week with two mixed ability classes.  The learning objectives were to be able to predict, describe and explain relationships between various development indicators.  The only resources used were exercise books, pens, some post-it notes and gapminder projected onto a standard, non'-tech whiteboard. 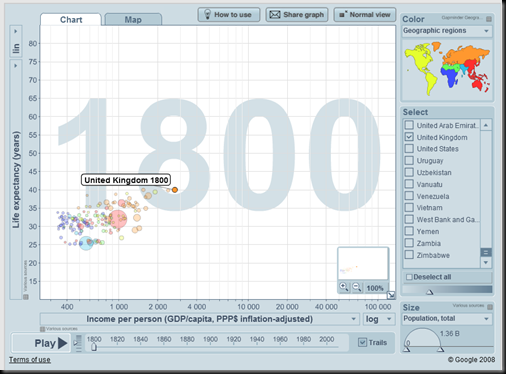 1. Display the graph above as students come in.  I told them nothing about it, but highlighted the position of the United Kingdom.  Students wrote their name on a post-it and drew a box any size they wanted to.  Each placed their note on the whiteboard to predict where the United Kingdom would end up in 2011.  Hit play and allow students to identify trends and World War 1. 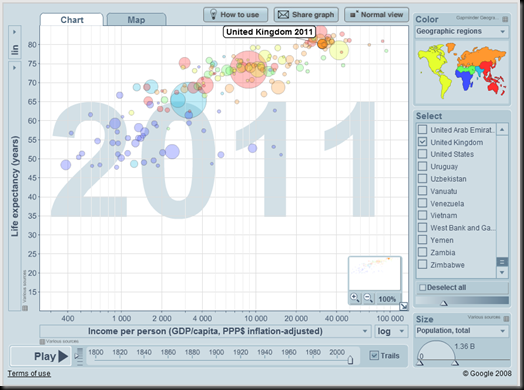 2. Who was closest? Get students to complete the sentence: ‘As GDP per Capita increases, life expectancy _____________.’  I didn’t explain any of the terms, allowing students to speculate before agreeing on a definition.  Students wrote 3-4 reasons why there is this pattern. 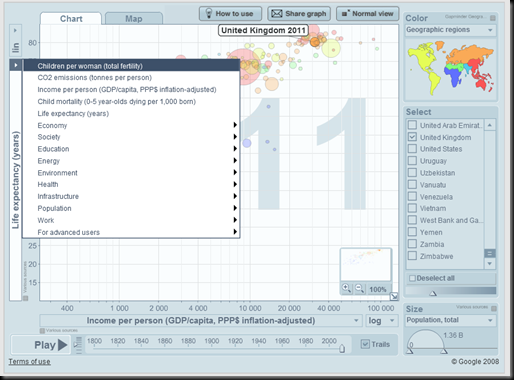 3. Highlight another variable and ask students to make a pattern about the relationship between wealth and Children per woman.  Once this is done, redraw the chart. Get students to write down 3-4 reasons why and share with the class.  The important thing here is to get students to speculate rather than give them answers.  I was delighted at the quality of response written.  I then linked this to GCSE questions, building confidence and giving a taste of the subject at GCSE (these are Year 9s).  We explored a few of the other indicators, focusing on location, population size and anything else that we fancied.  A great debate raged after exploring the relationship between CO2 emissions and wealth.

4. Finally, revisit the GDP per capita / Life Expectancy graph and ask students whether it’s fair to simple classify countries  into ‘rich and poor’ or MEDC/LEDC etc.  I asked each pair to split the graph in to as many classifications as they liked, telling them that they would have to share and justify their groupings.  This was facilitated by some lovely laminated versions of the graph sorted by Sam.  Students used dry wipe pens and we used a random name generator and a visualiser to share and present.  I was surprised at how close the students were to the MEDC / NIC/ LEDC / LDC classification favoured by our examination board.  Now who said that stats weren’t fun?