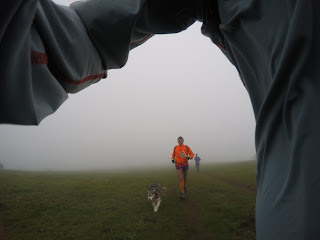 I've been running since 2012 when I decided that I was a fat git and needed to get fitter. Almost four years later and I'm a convert and wonder why I never got in to running in the first place. I'm no Olympian but this year has been frustrating with only three races and just over 630 miles in the legs. Due to injury I was gutted not to make the start line at the Lakeland 100. But I will next year!

Anyway, teaching is a lot like long distance running and, in the spirit of a light hearted summer blurb vaguely linked to the Olympic Games, here they are:

Many have found that I have a stubborn streak. Indeed, the reason that I strive for longer distances over the mountains is that I haven't found the challenge that has broken me yet. The human body is capable far more than anyone realises. One thing that gets me through the long miles is having a few mantras that I repeat to myself. In school, a handful of simple mantras are very powerful in getting messages across and reinforcing them consistently. 'Never Give Up' would be a good example.

A lot of the mindset and grit stuff, while inspirational and agreeable, is kind of common sense. When setting off for a long mission: a typical marathon training programme is 16 weeks of around 30-40 miles a week and an ultra a little more distance. There's no point in doing all of that work without believing that success is possible. I find myself visualising myself finishing the race and then eating for 48 hours solid. How do you get staff to visualise what success looks like for the school?

As soon as one race is over, it's time to start the training programme for the next. Similar things mean that it's good to vary the routine with running, I often go out without a map or a firm plan of where I'm going to run to. Running is a great way to explore!  In school, especially a secondary school, each year can feel similar to the last. There have been many government changes, however I don't feel that there is anything that has fundamentally shifted, however it's easy to get complacent and not develop. It may be controversial but it's true that every teacher (including myself) can improve and can benefit from variation.  The advantages that teaching has is that we do have the all important breaks.

Teachers have a great aount of trust: alone in the classroom with their classes. It's easy to lose touch with adults and feel that you're all alone. It's important to get out there: in to the staff room; online; face to face and talk to other teachers about teaching. You'll find that you share more than you realise. Same goes for running, which is why I favour running on the trail and mountain because people say hello.

I run further and faster in training than I know I need to for the race. I practice running using the same equipment and food and follow the same hydration routines. Each time there's a chance to improve and build confidence.

The seasons affect my running and they also affect young people and teachers. It's much harder to find the motivation to run in the dark.

There is much debate around running. Which equipment one should use and the next technique. However, it's all done very much tongue in cheek and the running community doesn't take itself too seriously. The best teacher acts upon constructive feedback, tweak and move on. The online teaching community is almost as supportive as the online running community.

Knowing when to quit

Having a growth mindset and being gritty doesn't mean that one can't give up on something. With running, sometimes an injury needs to heal before hitting training hard and sometimes the latest teaching development may not be worth sticking with for some cohorts. Yes, research and being informed is important, but if the internal evaluation is suggesting it isn't working and there is no positive impact on learning, then it's time to pull the plug or tweak.

There is a wealth of data available to runners and it's possible to measure everything. I'm someone who doesn't wear a watch during the holidays because sometimes there is a thing as too much data. Sometimes it's great to go for a run just for the sake of the journey, without worrying about pace or distance. Just like it's really good every now and again to speak to young people and teach something that isn't in the curriculum just because we can.  Data and tracking is really useful, but not when micromanaged. It's about looking at long term trends and using the data to train effectively. Across the country on the 24th August, schools will be crunching the GCSE results. However, that is the wrong approach because the most important data in about the students still in the school. Should there be any surprises really? Each cohort, whilst sharing some attributes, are individual and unique. It's a real challenge to remember the young person before the data, just like it's difficult to remember to sit bak and enjoy the view from the trail during the race. After all, we are in the business of helping to shape young people, reducing them to numbers is wrong.