Last week I was humbled to spend the week with 250 teachers from around the globe.  The common element was not the flavour of the technology, but a desire to transform the lives of young people. This is an attempt to reflect upon the experience. First a few pointers to dispel with the bonkers position that some hold: only one flavour of technology:

Whilst in Iceland, on a school trip and needing to kill some time one evening, I filled out the online application to become a Microsoft Expert Educator.  The rest, as they say, is history. The Global Forum comes at the mid-point of the year long programme (would have been better at the end as a celebration and progress check of what we’d accomplished maybe?).  This post may change, and I’m certain to update it and add further posts.  I believe sometimes it’s worth putting down what you think and getting it out there.

This isn’t a blow-by-blow account of the week – read my Twitter stream for that.  This is just what stuck out.

The week was incredible.  Firstly, there’s the perspective.  I was there with a pretty good project.  Others were there with projects about getting clean water in impoverished nations with access to one battered laptop.  Certainly puts perspective on the ‘first-world’ problem of Ofsted inspections.  Indeed, in one region of India all schools are told exactly what to deliver, when and how.  In contrast, UK educators really have some massive freedoms that are perhaps taken for granted?  The highlight of the week (apart from working with the awesome Stu Ball and UK Team) was the most difficult learning experience I’ve ever been through.  That’s right.  Tougher than the week long Mountain Leadership assessments or learning how to fly a plane.  We often spout out the ‘allowing failure’ mantra.  How many have been thrown together with four other nationalities (two of whom have no English) and told to produce a plan to change the world and present it to education experts (including children) the next day? Walking the walk. 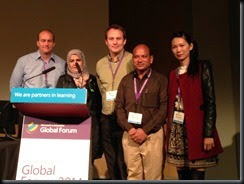 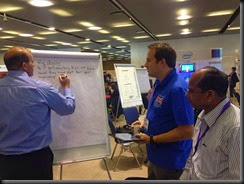 So, myself, a Kiwi Scientist; an Indian Mathematician; a Saudi Social Studies Teacher and a Taiwanese Artist set out to get children to tell Ban Ki-Moon that some of the Millennium Development goals needed to be better.  I won’t go into detail, except to say that the personal learning experience was immense.  When was the last time you really had to learn?  I wondered about the last time I had to do something rather than a choice.  There are some lessons in there for me to take into the classroom.  I was also pleased that students in the UK contributed through the twitter stream.

The rest of the week saw the usual (and by now depressingly predictable) keynote speeches that preach to the converted and I find rather too self-congratulatory rather than challenges.  To me, a group of educators of the calibre gathered need to look at what we are doing wrong as well as what we have right.  There are some great new tools shaping up to use in the classroom soon (some of them that are designed for the classroom too…).  Microsoft may have been late to the party, but their stuff looks great.  I’m yet to find something that equals OneNote as a digital, collaborative exercise book for example.  Indeed, if I were in a 1:1 school tomorrow, OneNote would be doing most of the hard work.

I did enjoy listening to the politicians and princes, and found the Spanish Education Minister’s keynote heartfelt and refreshing.  Spain has over 40% unemployment.

Another highlight was TeachMeet Europe.

This is what happens when you enjoy a late night malt with Stu Ball: he convinces me that we could pull off a TeachMeet Europe with a days notice, no room, no technology, no one familiar with the concept (interestingly, no one in the room outside of the UK knew hat a TeachMeet was).  I’m so happy I said yes and compared the event.  We had seven nationalities presenting and had presentations ranging from a modified ‘I have a dream’ speech to close up photographs of stuff to some brand new (to me) online tools.   It all goes to show that what I believe: if you throw teachers together and ask them to talk about what they do everyday, you don’t need a plan or technology to leave inspired and full of ideas to try in the classroom tomorrow.  Of course, there was free beer too…..

I also enjoyed making some extra contacts and heading to the expert panels.  The second of these, on 1:1 learning, was great as the chair opened up to the floor early and an engaging conversation followed with many making contributions.  One thing I would like to see is a feature where teachers from some of the less developed countries get to post some problems, perhaps ‘barcamp,’ style. Others could see where they could contribute and get involved with trying to solve those issues / build lasting partnerships.

Things that I will investigate more and get involved are:

It’s going to take a while to reflect and act upon everything I saw – there are some things that if I were still a head of department I would have put in to place already.  However, there were are few gripes:

Having said that, I think Microsoft Education have it right and are heading in the right direction with both their product offering and general approach to putting learning first and supporting teachers.  I would recommend getting registered (for free) on the Partners in Learning Network.  Download and explore some of the free stuff and see how you could use it.  If you find no use, nothing ventured, nothing gained.  Saying you won’t look just because it’s Microsoft is failing your children.

A massive thank you to Stuart Ball and the Microsoft Education Team and to Team UK – you may have shunned my offer of a 10 mile run, but you kept me sane, challenged and will motivate me into well into the future.