I can often be heard muttering that if young people leave a classroom talking about iPads, mobile devices or using their own phones then that’s not a good situation.  What we are aiming for is that students walk out of the door talking about the new knowledge they have gained; the new skill they have gained or the new insight that has led to greater understanding of the topic being studied.  Technology should be pervasive and not invasive.  We are striving for a situation where having the option of using a mobile device is taken for granted. 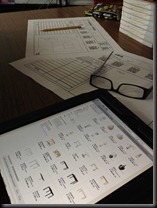 In this context I had the pleasure of working with Rachel Jackson, a talented teacher of Spanish.  Rachel co-constructed two lessons that were designed to assess the knowledge of Year 7 classes.  The important thing here is that she had the time to plan and really think deeply about what mobile devices (in this case iPads) could bring to the learning.  Time is a factor that is often neglected when introducing a new piece of kit. IWBs are a classic case in point.

Students had to equip a home using the Spanish IKEA web-site.  Working to a budget and in Spanish, I really enjoyed watching the students engage in the task.  What I was most impressed with was how they didn’t focus too much on the devices.

In Rachel’s words, the technology brought:

These features enhanced the learning, and the pupils were able to demonstrate their grasp of language.  The lesson utilised QR codes embedded into a worksheet so that students could find information quickly rather than searching for it themselves.  This meant that they were able to remain focused on building the language skills rather than waste time locating relevant resources.

The class were given very little explanation of the task, and I saw lots of collaboration and independence in operation.

The lesson did highlight one barrier to students’ using their own devices, or using school bought devices: access to WiFi.  I don’t believe that parents should be further subsidising their child’s education by providing a 3G data plan and therefore I would argue that a pervasive, school-wide WiFi network is a must if mobile devices are to be used so effectively.  Rachel’s room has a flaky connection to WiFi, so this was my solution:

Another issue is linked to the variation in middle leadership decisions.  The equipment used (16 iPad 2s and 3 MiFi dongles) were geography’s provided by external funding from pursuing outside grants and awards.  In the absence of a whole school lead on mobile devices (and such a thing is often not really needed), the role of middle leaders has a huge impact on the quality of learning.