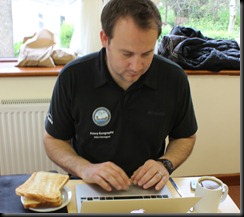 Breakfast time at the first ever Field Studies Council Hack Day/Weekend, working on my lightning talk and feeling out of my depth (great toast though).

48 hours later and I was leaving the Slapton Lee FSC Centre buzzing with possibilities and genuinely fizzing with goose bumpy potential.  This post will be a little messy as I’m getting these ideas down as they form.

I had no idea what a hack day involved before I stepped foot into the arena.  I was sceptical as so many ‘tech-ed’ conferences fizz with potential but rarely turn in to reality.  From the moment #fschack started, I was taken back by the positive fizz of excitement and hard work.  Plus, after being frustrated for years about the lack of good technology to use in the field, I left having seen at least a dozen worked up prototypes and apps.  Three of which I could see working in my setting now.

I helped to set off the day by presenting some challenges from my perspective, then visited a few ‘bar camps’ which are 10-15 minute spur of the moment chats.  Having never been to an unconference, I really liked this format.  It seemed to give the developers a clear insight into the issue.  I was also impressed with the questions coming from the hackers.

In summary, the challenges I tried to present were:

If we take the enquiry process, and especially apply it to the Controlled Assessment process, the gap between when the data is collected and when it is processed or visualised is far too long, even if it’s later that day. 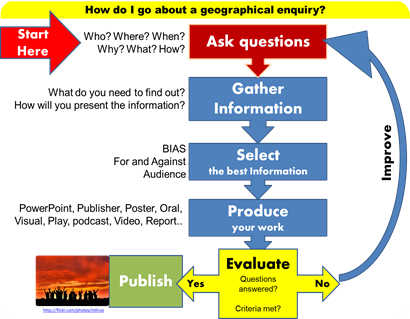 It was great to see that the resultant hacks all improved learning, and it was clear that the concept of having technology that adds value to learning was central.  For example, several of the hackers talked about the importance of getting young people to do things the ‘hard’ way before using the quick solution.

I also came away with a clear message: young people should be involved in building scientific equipment.  More on this below. 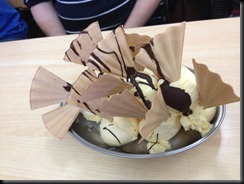 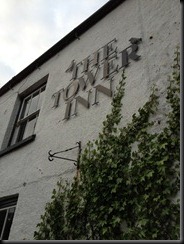 Finally, there was some powerful visualisation methods for existing data that would assist students in exploring data.

Some of the hacks that I was either involved with or stuck in my head are described below.  Check out the blog for a blow by blow account including podcasts and interviews and a full list of hacks.

Created a bat detector for under a fiver. 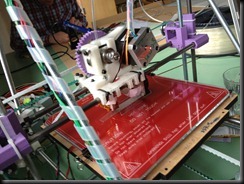 We conducted some beach profiles on Slapton Sands (hard work I know but someone had to take the hit…). Gemma created a 3D model and printed out cross sections.  This has huge potential as the 3D cross sections show subtle changes in the beach profile and could be used to compare different stretches of the same beach, sections after storm events…. In terms of helping less able students to visualise their data this would be fantastic.   How good would it be to create 3D models of the beaches which we study? The equipment is affordable, and the training in using the CAD software achievable. 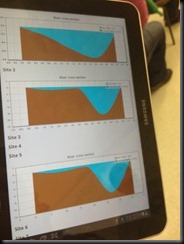 I loved this and it won the best in (the) field hack.  A web app that collects and visualises data.  River cross sections were used, the app would replace a clipboard, worked off line and guided students through the data collection process.  The data can be seen in graph form immediately.  This would allow data quality to be checked and would act as an incentive for students if the patterns were correct.  The app also graphed the data allowing students to focus on the patterns.  As mentioned above, this would augment the traditional data collection and presentation process and make data more accessible to all students.  Traditional techniques of measurement are used also. 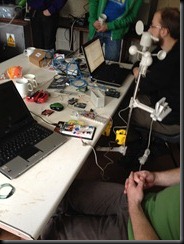 These two project hit me like a bulldozer. A lightbulb went off. Ting!  It dawned on me that students could a) build their own equipment and b) gain more and better data in this way. More on this in time, but this has cross curricular written all over it

Explored the possibility of using geocaches with hacked stuff to enable assessment / options / auto lock down.

This took historical river data and visualised it.  There was a collective ‘ahhhhh’ when channel cross sections were shown as a graph that morphed between different times and sites.  The changes in channel shape were immediately obvious as we travelled downstream.  A side effect was that different data sets (all collected by students) gave different results and this would allow the easy exploration of data and data capture quality.

All in all. Excellent, and it;’s only the beginning as I type there is an idea for a student built volcano bomber,……..

A big thank you to Harriet, Ant and everyone there.  I arrived a sceptic and left inspired.