We don’t believe in waiting. And we do believe in taking pedagogic risks.  This resulted in a group of young people being handed iPads and asked to complete a task.  Many thanks to James Byford, who through Creative Partnerships has provided real inspiration on this.

The brief was to create and share with the Headteacher an evaluation of our off timetable days.

The iPads were set up with Evernote, with the brief below (set up by James): 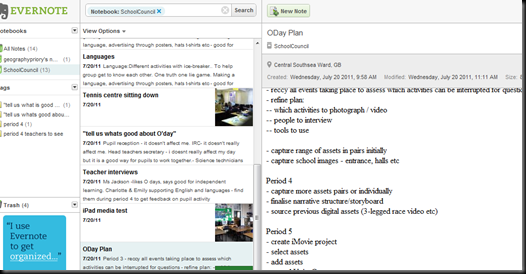 The great thing about Evernote is that the teams of students could work independently to each other, but at the same time see what the others were up to.  In addition, I could track and see what was going on and add in ideas / suggestions / extra tasks.  This could be shared with the rest of the class.  Evernote captures audio, video, images and text. 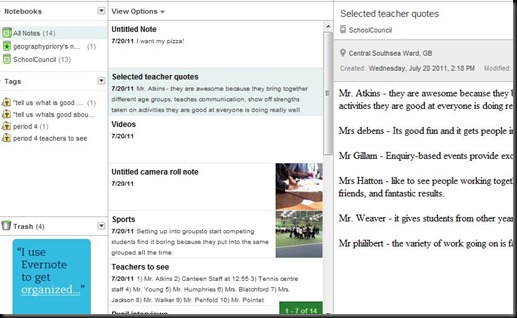 This is a whole new way of working – with a co-constructed question and open task. All I wanted was a video of less than 2 minutes.  The how, what, where, when was negotiated and created together giving young people control of their learning.

All of the media captured was exported into iMovie and the brief was met.  I can’t show the video in the public forum.

I can see Evernote being used to ‘push’ out activities and tasks for individual teams to get on with.  This will prove invaluable during GCSE controlled assessment.