I often like to leave it a little while before writing about keynotes and workshops. This allows the initial ‘WOW that is cooler than last year’s pants!!’ factor to subside and to allow some reflection back in the real work of school! Often, if it’s still with me a few days later, then it’s far more likely to have an impact.  What follows is purely informed by classroom teaching, and assumes that in the academic world it is both right and necessary to question assumptions!!

The Professor’s work is inspiring and presents a number of challenges to normal thinking in UK education.

Firstly, for those that may not be familiar with the Professor’s work, I fully recommend watching this TED talk.

The keynote was streamed live from the event by NGFL Cymru and is available here – you can also get to here my New Year’s Technology Resolution. The quality isn’t great however. 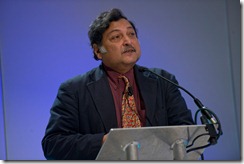 Sugata Mitra is a polished speaker and his style of presentation and use of understatement is very effective.  I took away a number of key points.

Firstly, while the story of self-learning in India is amazing and powerful, there is the question about whether the young people are able to access quality learning.  I think that the ‘Hole in the Wall’ project was nothing less than spectacular.  The message that I get is that if young people can teach themselves the basics of using a computer and finding and learning information online, then I need as a teacher to be upping my game.  In other words, I need to be focussed on the learning that isn’t simple.  One way that I have attempted to do this is by considering complex issues with Year 7 students.

It is often especially frustrating when faced with an older group of young people that are not fully versed with using email and searching for information. I tried to adopt Mitra’s approach when using Live@Edu with Year 7. I simply mentioned that there was a useful collaboration tool that they had access to, but then left them to it.  A few weeks later, and I’m receiving shared presentations and work through the system. The result of this approach was to free up more time to focus on the complex issues of environmental / human interaction. 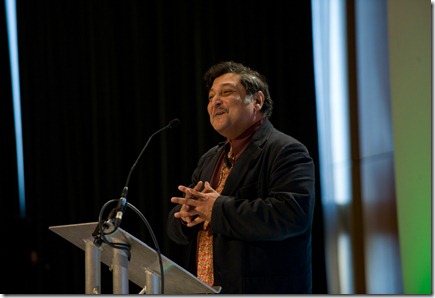 Secondly, I love the idea of grandmother teaching.  This essentially is showing an interest and using shovels loads of praise. This makes me look at my own practice and ask myself whether I need to give more praise and encouragement.  It also begs the question whether there is a role for volunteer ‘Grannies’ in schools, especially with homework.  Could this be a way of helping those young people with very little parental support?

Thirdly, a few delegates (mainly via Twitter) raised some concerns that the approach adopted by Mitra in Newcastle schools may encourage surface learning.  As young people work collaboratively in groups of 4 they are encouraged to use the work of others.  The work demonstrated by Mitra focused on knowledge such as ‘why did the dinosaur's die out.’ While I agree that this style of knowledge and learning could encourage surface learning, it also encourages the development of collaboration and independence.  The role of the teacher here would be to moderate the work and the challenge the group through questioning and to encourage the self assessment of work.  I also think that rather than using simple questions, this technique would be very powerful set within the context of an enquiry.

For example, Year 8 have recently been engaged with enquiry learning based upon the following key question: ‘How are residents of the UK Interconnected with Palm Oil production in other parts of the world?’ This is a more complex question than the examples cited by the Professor, but the approach adopted was similar (and inspired by his talk in Berlin):

What we found was that the class found out the basics very well.  For example, the products that palm oil are found in, where palm oil is produced etc.  However, by encouraging the use of complicated questions, I would argue that learning moved past the surface.  For example:

The final point that I took away was the relationship between good school and good teachers.  In the UK and India, the trend is for good teachers to move to better schools, or to move out into non-teaching roles. This is an issue that I often reflect upon and have no answer of opinions to share here.

Overall, I really enjoyed Professor Mitra’s presentation and it will certainly continue to change the way I address certain aspects of teaching and learning.