Lessons on feedback from an Olympic champion 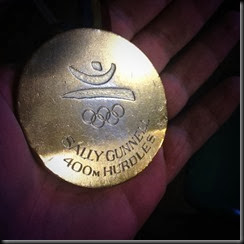 Well before Christmas, Sally Gunnell visited the school to give a talk at the start of an Inset day.  The session provided much to think about and mull over. I’m not one to tell others what to think of a session, I’d rather assume that they are able to figure that out.  As I lead on feedback at the moment, below is a summary of what I got out of the session.  There may even be some practical value:

Setting goals is really important for feedback to happen.  Sally set her sight son Olympic Gold and a failure to get into the Olympic team at 18 cemented this.  In schools this would mean not setting mediocre targets and not allowing students to achieve what is expected of them but to go further.

In addition, without a goal it’s just not possible to figure out how to get there.

There is no way to improve without acknowledging and dealing with failure.  Failure should be encouraged in classrooms. Teachers should be encourage to take risks and fail from time to time. Sally spoke about how she used to be coached through this process.  This reminds me that written feedback that isn’t acted upon is empty and pointless.  There needs to be a dialogue between teacher and student that isn’t limited to pages in an exercise book or target sheet.  Pupils would benefit from coaching and practice.  Acknowledge that we are all still learning and don’t know the answers as even Olympic coaches keep on learning all of the time.

Nothing is impossible.  It’s far too easy to stay within your comfort zone and this often means that you don’t grow as a person.  With a clear set of learning goals and feedback that identifies how to close the gap, students need to learn how to cope when it doesn’t go quite right.  And it isn’t going to go right quite often.  This is where resilience and character development may have a place.

4. Celebrate success, but analyse it.

Keeping focus on the bigger picture is important. It’s easier to cope with dips in the road if you can keep visualising the end goal.  Sally mentioned on winning a silver at the European Championships the praise she received was, in her mind, undeserved as she gave away the Gold.   How often is undeserved praise given away?  How hard do students have to work in order to get it?

Sally is often found how she found the time.  She mentioned that by focusing on the details it’s possible to find the time.  Don’t expend lots of time trying to control the uncontrollable.

Jack Reacher always plans for the worst and hopes for the best.  Do we plan for failure or do we move on quickly to get through the content?  Is that the best thing to do?  If we know that some parts of the curriculum may take longer to get through than others, why don’t we plan in time for feedback?

You know the one.  We all have it.  It;s the voice that says it’s not going to work.  We need to fight this as teachers and help young people to deal with it also, or at least acknowledge that their motivation may be lacking because their inner voice is difficult to deal with.  Sally had a technique where she used to write these negative thoughts down on paper.  Then she screwed it up and threw it away.  That may not work for everyone, but I wonder when I last considered the inner voice that’s going on in my classroom.  How do the small failures / negative feedback affect these young people?  Giving negative feedback is all well and good, but if it’s all you’re getting all day then it sucks.  When I teach micro navigation in the outdoors, I always plan to get early wins.  Simple legs that give the individual or group I’m working with early confidence and success that can be built upon.

8. Believe in your own abilities.

Trust teachers. Love what you do.

A lot of this has fed into my thoughts about feedback that I do plan on sharing at some point. 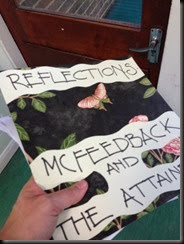