And it's hard to dance with a devil on your back
So shake him off, oh whoa

Shake it Out, Florence + The Machine

I’ve written before about the need to avoid using other people as excuses for poor teaching.  People like SLT, Gove and Ofsted. Thursday saw another top TeachMeet at Durrington High School, put together by Shaun Allision (he has a book out you know). I thought I’d take the opportunity to talk about how great Teachers’ Standard 4 is.  The thing is, the current documentation ensured that we have permission to innovate and create.  Not that we ever needed that permission.  I serve at the pleasure of the young people that I work for.

Sometimes it’s difficult to see past the negativity of this profession.  Tories get in. Gove appointed education bloke. New Standards. New Curriculum.  The default position? Must be bad.  Must be awful.  I can see two problems with this approach.  The first is illustrated by this video:

I believe that it’s a lack of vision that makes us slaves to the document.  Teachers need to look beyond the document, beyond the map. I’ve lost track of the number of times I’ve heard ‘but it’s not mentioned in the new NC.’

The second.  Why is our default position one of disaster?  Why not hope and excitement? Let me give an example from the climbing world.  When Joe Simpson fell and smashed his leg way up a remote and high mountain, this is what his climbing partner thought: 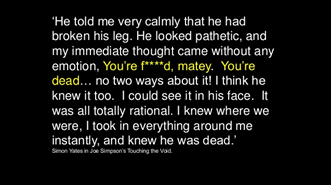 That’s not what he told him though.  Simon saw the worst and yet took positive action that ultimately saved both of their lives.  This is what teachers need to do. Yes, we should put pressure on Government and campaign, but in our day to day job we need to save the day.  That’s our job.  Where are the opportunities and excitement? No document is ever going to be creative, teachers are. A document that allows creativity can also be poorly implemented.  It’s the quality and actions of teachers that matters.

Here are two examples of why I love the Teaching Standards and National Curriculum: 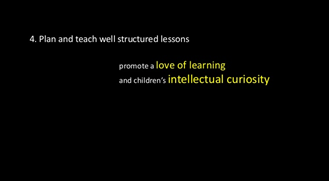 Can you really argue with that?  How are our schools ensuring that this happens?  How is it linked to appraisal?  How would you describe the following image? 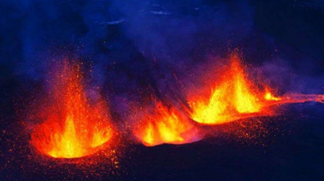 A better question would be, what level of description would you accept from a student?  It’s a volcano?  A volcano with spouting lava?  Then perhaps we would move on to learning about the facts and figures.  What would happen if we used the following extract from a novel, reading it out loud:

‘The cloud thinned ahead of them to reveal a flat section of ice and rock on which a lone four-by-four and a couple of snowmobiles were parked. Dúddi eased his superjeep next to the other vehicle. A man and a woman were sitting inside staring upwards into the mist. The team got out of the jeep. It sounded as if an angry monster was thrashing about just out of sight in the clouds. It was cold; the wind was biting. Everyone zipped themselves up in their snow jackets and they walked as a group towards the bottom of a pile of rubble; Erika was very grateful for the coat Dúddi had borrowed for her from his sister. Despite the wind, she could smell sulphur in the air. Then the curtain lifted. Erika looked up and saw the most astounding sight of her life. About three hundred yards ahead the monster was revealed: a churning mass of orange and red fire, spitting, exploding, pouring up into the air with a steady rhythmic crash. It had eaten out the top of a small dome, creating a bubbling bowl of magma, over the rim of which a dribble of super-hot lava spilled, an orange river burning its way through the ice of the glacier down to the side. Steam spewed out of the cauldron, and from fissures in the ridge all around them where smaller fires of stone burned.’ Meltwater (Fire and Ice) by Michael Ridpath.

The passage is full of geographical terminology but also, in my view, starts to develop that intellectual curiosity and love of learning.  Learning must be far more than facts.  The Teachers’ Standard 4 demands that we look beyond knowledge.

The next opportunity comes from the National Curriculum: 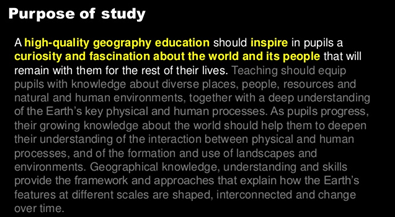 This reinforces the need for us to help children fall in love with learning.  How do we do this?  Stay positive, know our subject and remember why we love teaching it. We have a responsibility that extends beyond the classroom. We have the opportunity and the privilege of helping young people well after our institutions.  What we say and do is remembered.  Vic Goddard, who spoke at #DHSTM14, illustrated this by showing this:

How will you be remembered by your students?  I’ve been a teacher for ten years.  I was told that the Tories and Gove would destroy education.  They haven’t.  I’ve said it before, but my day-to-day practice isn’t constrained by the policies of the current Government, it’s set free.  I see my job as a leader to show others where the cracks and opportunities are.  I can play the game to satisfy the hawks, but the young people are my customers and it’s them that I take great pleasure in serving.  I serve them by never giving up.  I serve them by never using Gove, Ofsted or SLT as an excuse to deliver sub-standard learning, otherwise we may as well write off a generation.

Where are the opportunities? Everywhere.  Next year bring a General Election.  Beyond that, as I’ll be working another 452 years until my pension age, there will be other governments and no doubt other profits of doom.  The way to overcome this is to hold a strong, clear and coherent vision of what learning is and what we want young people to be.  This is what we are setting out to do at my school.  I serve at the pleasure of the young people that I work for.  Bring. It. On.

View the slides from #dhstm14 here: